AMERICA: WE CREATE OUR OWN TERRORISTS

Michael Hastings, in his hard-hitting new book, "The Operators," discusses "politically correct imperialism," why the military is obsessed with its legacy, and why we're stuck in post-9/11 thinking. 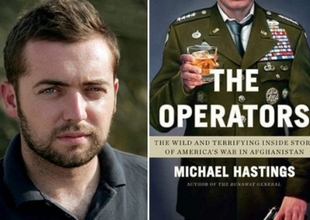 [Excerpt]
But one quote that stuck with me summed up the essential flaws in the thinking, the safe haven flaw, if you will: “Marja must be controlled in order to eventually control Kandahar. Kandahar must be controlled to control Afghanistan. Afghanistan must be controlled to control Pakistan. Pakistan must be controlled to prevent Saudi Arabia terrorists from getting on a flight at J.F.K. Airport in Jamaica, Queens.”
Did that revelation all come to you at the same time? Or how were you able to put that together and make it so crystal clear?
MH: Well, to me this was apparent in Iraq, but it's also apparent in Afghanistan: that nothing that we're doing on a daily basis -- by "we" I mean NATO and U.S. forces -- has anything to do with preventing another September 11. I mean, 99 percent of the people we killed over these past 10 years would never have posed a threat to the United States. I mean, that's a devastating indictment of our endeavors -- it's devastating.
MH: In 2008, after my first trip to Afghanistan, I came back and did a story for GQ, and my editor said something -- and it's a line I've stolen from him – he said we're stuck in post-9/11 thinking. There was this whole period of time where you could be accused of pre-9/11 thinking, but what's happened is we're stuck in post-9/11 thinking. And these misconceptions that I think took hold quite early have become institutionalized. And institutionalized in a way that is meant to shut down debate.
Because you may say, well, we should get out of Afghanistan, and then the answer is, well, what about the terrorist safe havens? Grover Norquist actually made the argument that there's a reason why there's not a robust debate from the other side about Afghanistan – it's because they know how flimsy their argument is.
And we haven't even gotten to the fact that by being in these places – and with the trauma that we're inflicting on these societies while we're there – that's the way you create terrorists, it's not the way you defeat terrorists.

Email ThisBlogThis!Share to TwitterShare to FacebookShare to Pinterest
Labels: ANTI-WAR, ANYONE'S SON WILL DO, love your enemies, non-violence, PEACE, VIOLENCE, war, war is not christian