Posted by Keith Giles at 9:01 AM No comments:

"I'm gonna bring the Jews back into their land. I know in the past I got really upset if they made alliances with powerful nations to be their providers and protectors, but this time round I'm gonna raise up the USA to provide weapons to my people and I will punish the USA if they ever question a single action that the Israelites perform - I'll send hurricanes and war to the USA if the USA ever stops providing weapons and moral support."

"And that's the other thing - as I bring my people back into their covenant land, I wholeheartedly support having them drive the other people who have been living there in the meantime into gigantic ghettos, like a place called Gaza - and blocking food, medicine, and supplies from getting to them."

"I'm a God of war you know. So, make sure these Arabs know they are not part of my covenant with you Israel - and when they fight back, you will know how evil these people are because they don't readily submit to the way you have treated them. Then kill them - kill them all." 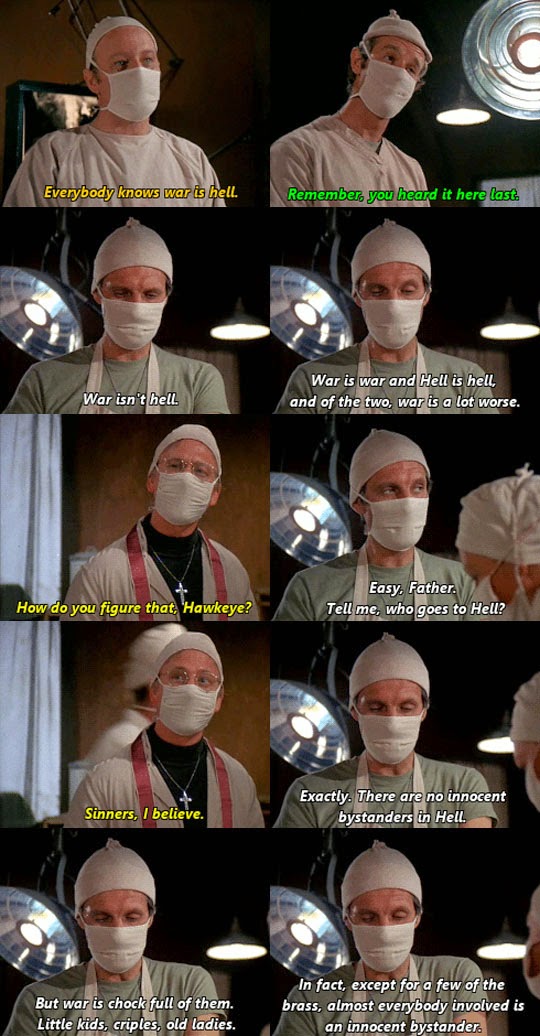 Frank: Well, everybody knows war is hell.BJ: Remember, you heard it here last.Hawkeye: War isn’t hell. War is war and hell is hell, and of the two war is a lot worse.Father Mulcahy: How do you figure that, Hawkeye?Hawkeye: Simple, father. Tell me, who goes to hell?Mulcahy: Sinners, I believe.Hawkeye: Exactly. There are no innocent bystanders in hell. But war is chock full of them. Little kids, cripples, old ladies, in fact, except for a few of the brass almost everybody involved is an innocent bystander.

Posted by Keith Giles at 6:57 PM No comments:

A Christian In Iraq: Loving My Enemy by Jeremy Courtney

READ THE FULL STORY AT CNN.COM> 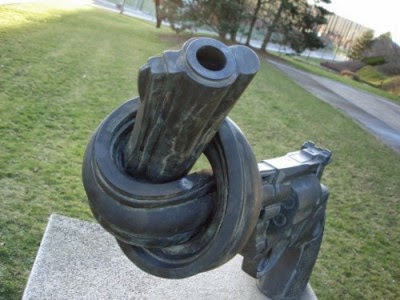 My wife and I moved to Iraq in 2007 to assist in relief and development. We have since made friends on all sides, deep behind “enemy lines.”
Since the fall of Mosul to Sunni militants in June, the world has struggled to accept the failure of the American project in Iraq, the rise of “political Islam” and the marking of Iraqi Christians and other minorities for death or expropriation.
The world may watch from afar and denounce all Iraqi Muslims as militants bent on conquest. But up close, the reality is very different.
It was a Muslim cleric who may have saved this Christian's life. And I'm not the only one.
Even as jihadists justify their atrocities in the name of Islam, millions of Muslims are standing in solidarity with Christians who have been expelled from their homes.
In Najaf, displaced Christians are being housed in the most revered holy site in Shia Islam. Sunnis, Shia, and Christians worship side by side in Baghdad, praying for the peace and future of Iraq.
Our first six months in Iraq were difficult. The lack of electricity and water, the drive-by shootings, the explosions that more than rattled our windows — they shook our souls.
It wasn’t until we began helping a little girl who needed lifesaving heart surgery that we could drive back the gripping fear. Working with her father to save her life injected meaning into an otherwise confusing conflict.
Soon after, word began to spread that we were helping “last chance children” who had been rejected by the other humanitarian aid organizations. The larger organizations looked at pediatric heart surgery and saw nothing but risk.
We spent tens of thousands of dollars sending children outside the country to Israel and Turkey for surgery. Soon Sunnis and Shia, Kurds and Christians were lining up in our office in search of hope.
One day in a hotel lobby I bumped into a Muslim cleric decked out in robes and headdress and found myself fumbling for words. We had been taught to fear these types of clerics. They were supposed to be the crazies who promoted suicide bombings and sectarianism.
But that wasn't the case with Sheikh Ali.
“Peace be upon you,” he said with a huge smile. “We are here as a conference of Muslim scholars. We are against the terrorists.”
The sheikh welcomed me for tea with 10 other clerics and, at great personal risk, welcomed me deeper into his life.
Over time, Ali joined our effort to eradicate the backlog of children who were waiting for these lifesaving surgeries. He introduced me to Muslim leaders. He told me stories about fending off Shia militias as they sought to capture his neighborhood hospital and turn it into a partisan outpost.
When a top Sunni cleric issued a fatwa calling for our death because we sent children to Israel for surgery, our lives turned upside down.
It was Sheikh Ali who defended us against his friend, arguing that if we had saved just one life, as the Quran said, it was as if we had saved the whole of humanity.
He may have saved our lives with that move, but he fell out with the cleric after sending us a baby girl from his own mosque who needed surgery.
Demand for our work at Preemptive Love Coalition rose as international news reported on Iraq's shocking birth-defect crisis. We stopped sending children abroad and partnered with the Iraqi government to train Iraqis in their own hospitals.
Heart surgery is full of meaning in every culture, but especially in Iraq, where fathers find themselves begging anyone who will listen to donate blood while their child lies vulnerable in the operating room.
Once enemies have each other’s blood coursing through their veins, or your nemesis is holding your child’s heart in his hands, it is impossible to hate without condemning oneself, as well.
We know the world is not all rainbows and roses. There is a version of Islam out there that is dangerous and scary.
But there are far more Muslims like Sheikh Ali.
There is a lesson to learn from the fatwa that called for our death: It’s not violence or pre-emptive strikes that terrify the terrorists. They need violence to be done against them to justify their cause.
But pre-emptive love — shown through heart surgeries or simple hospitality — upends our simplistic stories and threatens hatred everywhere.
Or, in the words of the fatwa issued against our work:
“We must stop [these heart surgeries] lest it lead our children and their parents to love their enemies!”
God willing, Preemptive Love Coalition will mark our 1,000th operation next month in Iraq, with the help of Christian donors and Muslim sponsors like Sheikh Ali.
One thousand children, with thousands of fathers, mothers, aunts, and uncles across Iraq.
We’ve drunk their tea, celebrated miracle birthdays, and prayed for their children as they go off to school. The Iraqis we are training will save the lives of tens of thousands more.
So, in the end, I have to admit the cleric was right: Pre-emptive love does work. It destroys enemies by making them friends.
Jeremy Courtney is executive director of Preemptive Love Coalition, an international development organization in Iraq, and author of "Preemptive Love: Pursuing Peace One Heart at a Time." The views expressed in this column belong to Courtney.

Posted by Keith Giles at 6:54 PM No comments:

This picture says it all. 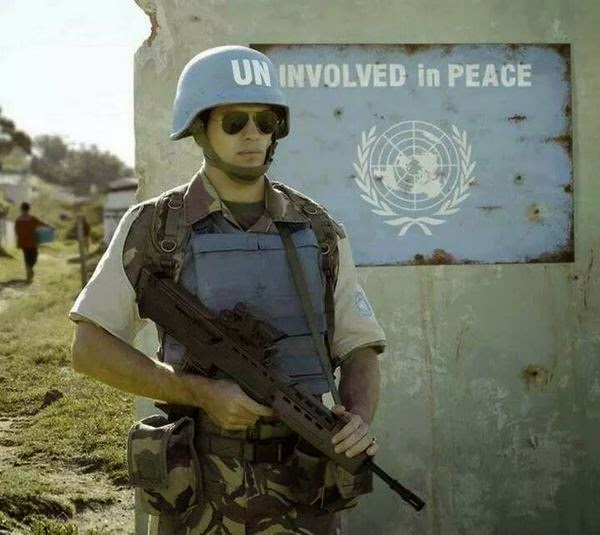 READ FULL ARTICLE HERE>
A world-renowned Canadian philosopher argues that the United States holds the world record of illegal killings of unarmed civilians and extrajudicial detention and torturing of prisoners who are detained without trial.
Prof. John McMurtry says that the U.S. government is a gigantic mass-murdering machine which earns profit through waging wars, and is never held accountable over its unspeakable war crimes and crimes against humanity. He also believes that the U.S. has become a police state, which treats its citizens in the most derogatory manner.
“I have travelled alone with only backpack possession through the world, and have found no state in which police forces are more habituated to violent bullying, more likely to draw a gun, more discriminatory against the dispossessed, and more arbitrarily vicious in normal behavior,” said McMurtry. “The US now leads the globe in an underlying civil war of the rich against the poor.”
“The US can … detain, kidnap and imprison without trial or indictment any US citizen or other citizen anywhere by designating them enemies to the US,” Prof. John McMurtry noted in an exclusive interview with Fars News Agency.
READ FULL ARTICLE HERE>
Posted by Keith Giles at 5:59 PM No comments: